It’s been a few months since I mentioned MadeOn Hard Lotion, but trust me when I say that I’ve used this lotion bar every day since I was first introduced to it many years ago! 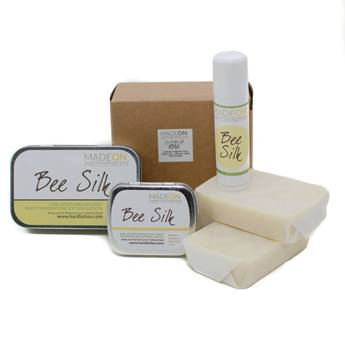 Today, I’m reminding you of it again to share an awesome offer Renee is giving all of us here. 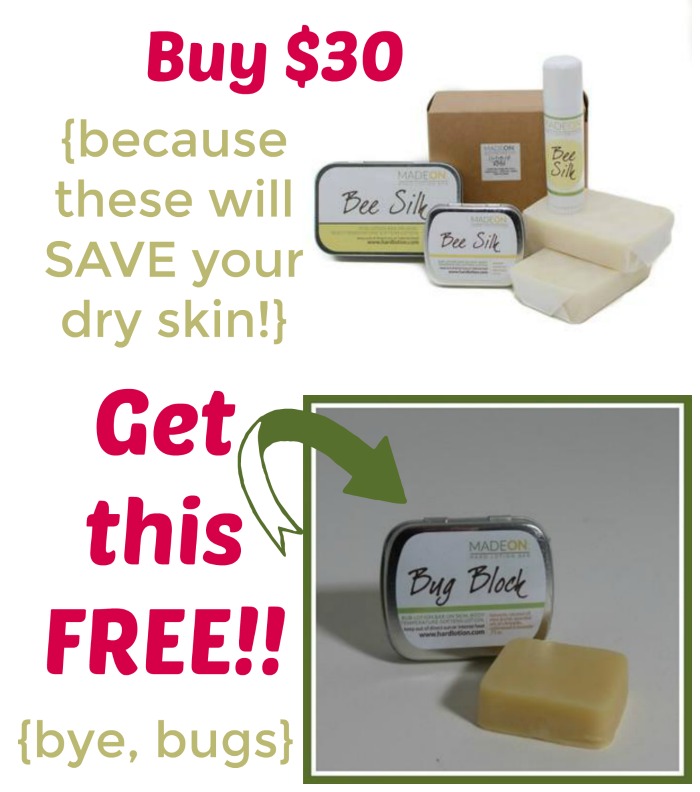 Why You Want to Take Advantage of This Deal

Let me count the ways.

I always send Bug Block to camp with my kids. We use it all summer and it truly is effective, without any harmful ingredients.

How to get a Free Pocket Size Bug Block

Receive a FREE pocket size Bug Block on any order over $30!
To redeem your free gift, add $30′ worth of products to your cart, then add the Bug Block Pocket Size Bar and apply code HHBUGBLOCK at check out.  The Bug Block will be free.
Offer expires June 16, 2018.

These links are my affiliate links. Huge thanks to Renee for this fun summer offer!

Fun news! During the month of August, Renee at MadeOn and I teamed up to offer you one of my eBooks for free with a minimum $10 MadeOn purchase.

I love this because I love their products so much! Their Bug Block and my gardening tips go hand in hand. And who doesn’t love a free eBook? 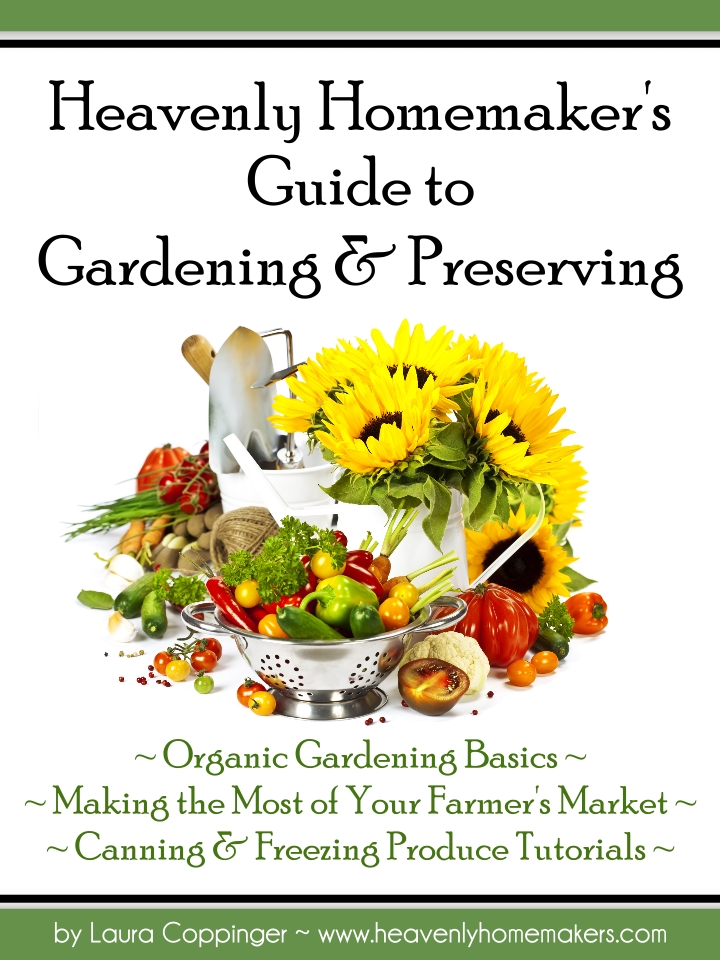 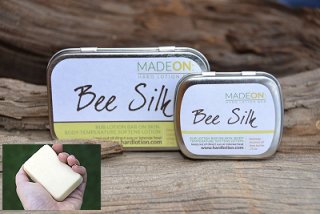 My favorite, most recommended MadeOn products include:

The e-guide will be automatically emailed to you within a few hours following your purchase. If you don’t receive it, email [email protected].

Enjoy this fun bonus with purchase, and watch your skin become healthier and healthier! 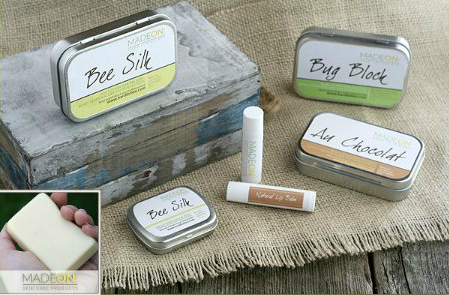 One morning a few weeks ago, before heading out for a full day of soccer games in the sun and wind, I smeared MadeOn Beesilk Hard Lotion all over my face. I planned to rub some into my hands as well, but figured I’d do it after I’d fed the family and washed the dishes. However, as soon as breakfast was over we rushed out the door. Therefore, my plan to put Beesilk on my hands was forgotten.

Fast forward a few soccer games and a few hours later. I was back at my house, wind blown and hungry. We had an extra family at our house that evening, and that family included a very cute five year old boy. As I was cutting up his meat for him at dinnertime, he looked down at my hands and said, “Wow. You have really old hands.” I looked at my hands and saw what he saw. My hands were super dry and ugly. Old lady hands indeed. ;)  The little guy then looked up at my face. “Your face looks young though, so that’s good.”

Alrighty then. Beesilk keeps my face young. And not applying Beesilk to my hands makes my hands old. Fair enough. You’ve gotta love the honesty of a child. Amazing that Beesilk works so well as to make that big of a difference, huh?

That night, I applied Beesilk to my hands liberally. I now have “young” hands again. Ha!

I always keep a nice supply of Beesilk Hard Lotion on hand for my hands, face, arms, legs, and feet. I love the stuff and how well it works. And I love that it’s completely healthy for our skin.

Now let’s talk a minute about Bug Block. I don’t want my family eaten up by mosquitos, nor do I want to spray my family down with toxic chemicals to keeps the bugs away. The solution? MadeOn Bug Block.  I love it! It’s perfectly safe for our skin, and it really works well to keep the mosquitos away. 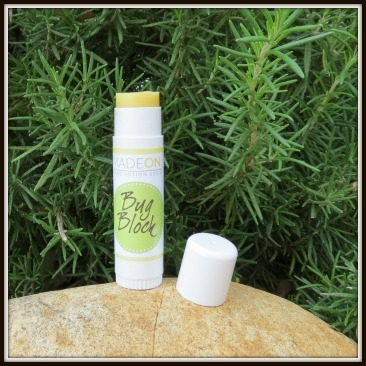 I can’t tell you how thankful I am to have heard of MadeOn. Their products work incredibly well, their customer service is wonderful, their prices are very reasonable, and the ingredients they use to make their products are perfectly safe for our skin.

I contacted Renee at MadeOn last week to see if she might be interested in offering all of us a little bonus…or maybe a giveaway. She came back with both! :)

Leave a comment on this post if you’d like to win one of two $25 MadeOn Gift Certificates. Super generous! I’ll draw two random winners on Monday, June 9. Be watching for a post stating the winners as you’ll be responsible for contacting me if your name is chosen.

Beyond the giveaway, you’ll get a free Bug Block Stick or a Beesilk Stick with a $25 MadeOn purchase! Use the code HHJune.  When your cart totals $25 or more, you can then add either a Bug Block stick or a Beesilk stick to your cart and the stick is then free! Isn’t that nice? This offer is good through the month of June. Shipping is free on orders of $45 or more.

You know my very favorite skin care/lotion that I use from MadeOn? (Beesilk Hard Lotion – what would I do without it?)  I just received a package perfect for this summer:  MadeOn Bug Block. Just opening the package and smelling the contents within made me giddy about summer. I can’t believe how good the Bug Block smells. I know Bug Block works because we’ve used it for several summers in a row. Mosquitos, back off. You’re going down.

So check this out:

It’s Bug Block in a stick form. That means it will be easier than ever to rub onto the skin. I am so excited about this! Our family is well stocked on this and ready for summer. It won’t hurt the skin because it contains only natural ingredients (76 degree naturally refined coconut oil, unbleached beeswax, naturally refined shea butter, essential oils of citronella, cedarwood, and lavender. No deet!).

The best part:  It doubles as a lotion.  Be still my heart.

Take advantage of this to get ready for summer. Mosquitos beware! We’ve got Bug Block.

Oh, mosquitos. They are horrible, making a fun picnic or outing much less fun. Bug block to the rescue, right? Sure. But is all bug block safe for our skin?

I’m super picky about anything that goes on our skin. Why? Because our skin is our largest organ. Because what goes on our skin goes into our body. Because what goes into our body effects our overall health. Thanks to our son, Malachi, we’ve learned how to treat our skin well so that our overall health will be better. It really is amazing how important it is to take care of our skin.

So while I’m not a fan of mosquitos, I’m even less a fan of spraying harmful chemicals all over my family to avoid bug bites. From Parkinson’s to cancer to behavior issues, I feel that the possible issues that we can face as a result of bug spray are not worth the risk.

I’ve told you all about how the MadeOn Lotion Bar has saved my poor, dry, broken out hands and have made them continually soft and free of pain. I love MadeOn and am so thankful to have learned about their wonderful company and products.

Recently, I had the chance to try the MadeOn Bug Block, which is just as safe, just as non-toxic, just as easy to use as their Hard Lotion Bar that I love. Not that this matters one way or the other with how it works, but can I just say how much I love the way Bug Block smells? Yes, it really smells good. Even my boys said this, and trust me – my boys aren’t so much into caring about how products smell. (Unless it’s bacon…) 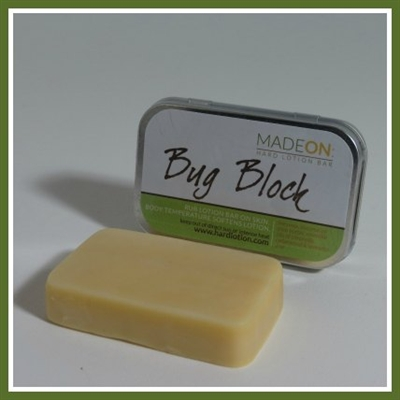 Great, so it smells good – but how does it work? Well, here’s my story:

Last week, we sent Asa (our 14 year old) outside with orders to remove all of the green overgrowth on one side of our house – not a fun job, and one that is typically quite mosquito filled. I handed him the MadeOn Bug Block and had him rub it all over his arms and neck and face. He spent a good part of the morning outside with vines and mosquitoes for company. Fun.

Later, I went out briefly to help all the younger boys haul off all the branches and vines that Asa had taken care of earlier. I really only planned to be outside long enough to give some direction, so I didn’t take the time to use the Bug Block. Mistake. I ended up staying out longer and helping more than I had intended, so one hour and several mosquito bites later, I came back inside.

While I tried not to scratch, I asked Asa how the Bug Block had worked. His response was, “Hmm. I don’t think I got bit at all while I was out there. Maybe there just weren’t any mosquitoes?”

Oh no. The mosquitoes were there. I didn’t see them either, but I felt them. Remind me to put on Bug Block next time. It totally kept the mosquitoes away from Asa.

So that’s my MadeOn Bug Block story. It works and it’s completely non-toxic and safe for you and your kids. How wonderful that we can take care of our skin and avoid bugs at the same time. Summer is saved!