The Macaroni and Cheese Experiment has been conducted.

In an effort to prove that “real food” often doesn’t take more time or more energy to prepare than “processed food”, I made both Annie’s Mac and Cheese, and my homemade Creamy Mac and Cheese – timing myself from start to finish on each – not doing any of the steps ahead of time.

I began last week by making three boxes of Annie’s Mac and Cheese. 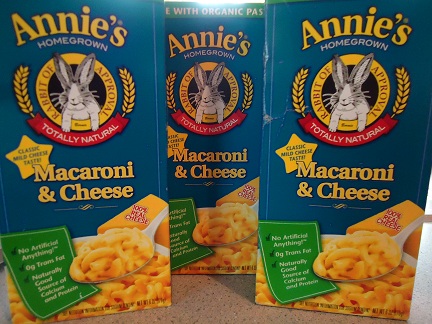 I do purchase this sometimes for the very occasional treat. I appreciate that Annie’s brand is at least made with better ingredients. But did it save me time to make this boxed, convenience food?

From start to finish, making a big pot of three boxes of Annie’s Mac and Cheese took me 18.5 minutes. Not bad, plus I was able to wash a few dishes while the noodles were boiling. 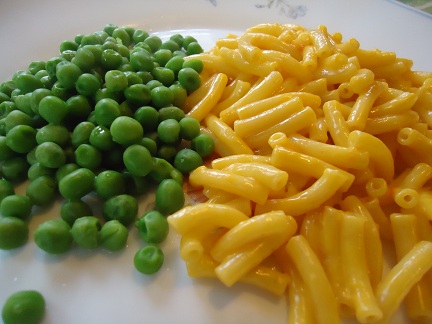 And how long did my homemade Creamy Mac and Cheese take???

Many of you suggested that I needed to be sure and count the time it took to grate the cheese for this recipe! I do try to keep some cheese in the fridge that we’ve already grated and put into a baggie to save time while I’m cooking. I didn’t do that this time though, so that I could give you a more accurate time calculation for this recipe. However, as I usually do when I haven’t grated my cheese ahead of time – I simply got the noodles and milk cooking on the stove, then grated a big block of cheese while I waited for the pot to get hot. Multi-tasking is so wonderful! (Plus I even grated extra cheese so that I will be ahead of the game next time I need it!) 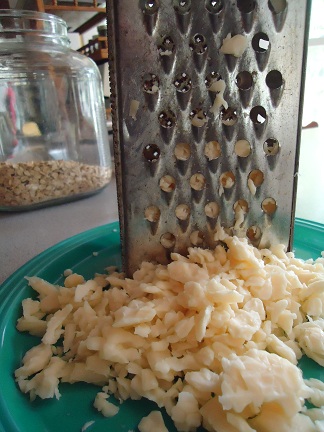 I do have to watch the pot and stir more often while I’m making homemade mac and cheese, compared to the boxed variety. However, I have found that I don’t have to stir the pot constantly, and can stir, then do another little job, then stir again, and do something else. As long as I keep going back to it, I am able to get several other little jobs accomplished while I make this dish. This time, I was going back and forth between boys and May Day projects, keeping up without any troubles with stirring the mac and cheese.

Total time it took for my Creamy Mac and Cheese to be finished? 19 minutes. Exactly 30 seconds longer than Annie’s. Woe is me. I am simply exhausted from the additional effort. ;) 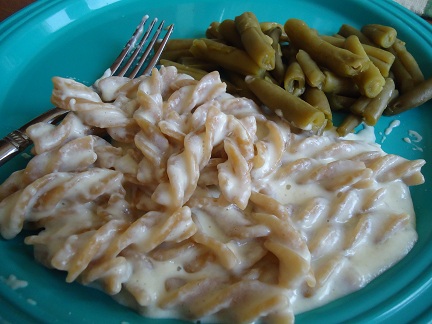 From experience, I know that whole wheat elbow noodles cook more quickly than the whole wheat fusilli pasta, so that may have cut my time even more. (Also, if you’re interested, you can use Tinkyada Brown Rice noodles in this recipe, which I’ve found works great and takes only a couple of extra minutes to cook.)

My conclusion:  Homemade Creamy Mac and Cheese is just as convenient and easy as making boxed mac and cheese. I dirtied the same number of dishes for each, and I was able to multi-task while making each of them. (Large pot, spoon, and cheese grater for the homemade; large pot, spoon, and strainer for the boxed. Yes, I did grate the cheese onto a plate, but then I served my food on that very plate, so as not to dirty another dish!)

And the taste? There is no comparison. Boxed mac and cheese is kinda fun, but I ultimately find it to be empty and flavorless. I also have a hard time getting past the unnatural color. Cheese isn’t orange, people! I love that the homemade mac and cheese has more sustenance and more natural flavor. Bring on the nutrients!

While I was having this mac and cheese throw down, I decided to be nerdy and calculate the price difference. It costs around $3.85 to fill my family with Annie’s Mac and Cheese, because yes, it does take all three boxes to fill us. It costs about $4.50 to make a pot of Creamy Mac and Cheese, since I’m using organic, raw white cheddar. That breaks down to be $0.11 extra cents per person to feed my family this healthy, easy meal. I’m pretty sure I can afford that.

So there you have it. Am I completely knocking boxed mac and cheese? Nope. Just stating the facts based on my research and experiment conclusion. Might we still eat the occasional boxes of mac and cheese? Maybe, and we’ll probably even enjoy it a little bit. But do I ever get to say that making a box of mac and cheese saves me time and money compared to making homemade mac and cheese?

Not unless I really feel like I can justify whining about 30 seconds of extra time, $0.65 extra for my entire family of six, and no extra dirty dishes. I think we all know the answer to that. :)

I’m thinking that it might be fun to do other experiments like this one. Any suggestions or ideas for what I should test next?