Our morning began with a nice round of light saber wars. Check out that ninja in the background with the purple light saber. 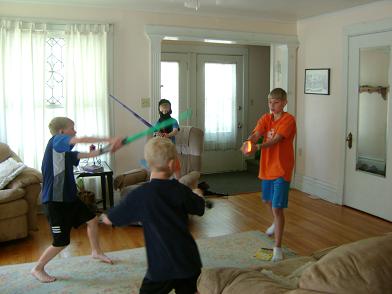 My living room is alive with this type of “violence” on a regular basis.

We spent time outside planting okra (yes I know that wasn’t on my original list, but I had a little extra space and Matt loves okra). I also put the boys to work pulling out a bunch of “sticky weed” (I’m sure that’s the official name for it) around the garden. They pulled it out and stuck it all over themselves. It was loads of fun…until the itchiness set in. 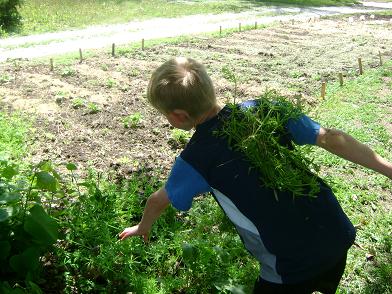 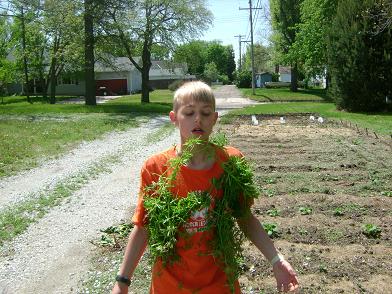 Asa with his sticky beard is the main feature of this picture…but if you would like to take a peek behind him at one of our garden areas, I can show off my little potato plants to you! And way in the back protected by milk cartons are our little broccoli plants. So far, they’ve all survived! 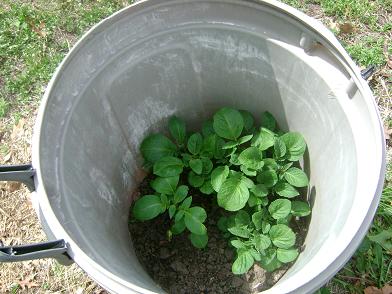 Here’s how our potato container looks now! Isn’t that SO EXCITING?!?!?!? Okay, maybe you aren’t a garden geek like I am…but little green plants growing out of soil makes me giddy. I added more soil from our compost area so that the “growing potatoes in a container” project could work. Notice that last time I showed you pictures of our container, it was the left side handle that was missing and this time it’s the right side handle. How did that happen?

After our time in the yard, we went in and cooked up lunch. 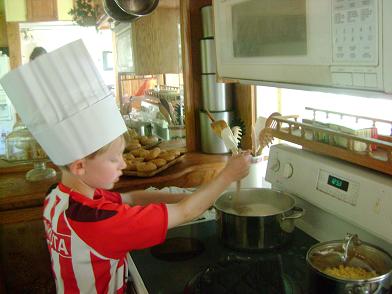 Here’s Chef Justus. Is that hat the greatest or what?! Here he is stirring our mac and cheese. Notice he changed out of his sticky (turned itchy) clothes after pulling weeds. 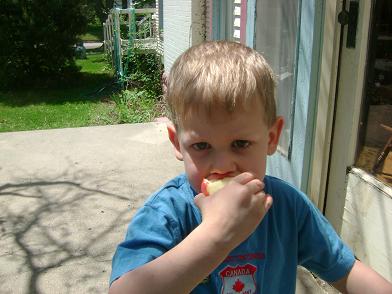 Malachi couldn’t wait for lunch. This little guy has been HUNGRY lately. I mean, more than normal. 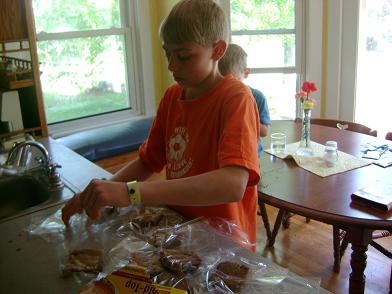 Our last soccer games of the season were tonight, and Asa wanted a treat for his teammates. We baked these cookies into bars and put them into baggies to share. 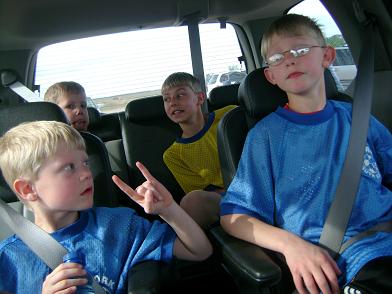 Here we are on the way to our last games of the season. Justus decided to sit in a booster seat, which is why he’s so high up on his chair there. Silly kid!

One last event to end our evening…

Malachi has been shy about playing on the field with his teammates (he’s a little four year old guy out there with four, five and six year olds), so most of the time he just sits on the bench and shakes his head no at his coach when asked if he’s ready to go in. I REALLY wanted his season to end on a good note. Soooo…I asked Malachi, “If Mama goes onto the field with you, will you play?” And he said yes.  And so I did.

There I was on the field with a bunch of little people running after a soccer ball. I was trying to stay out of the way, yet trying to push Malachi over to get the ball (which he really didn’t want to do). Other parents were waving and smiling their teasing encouragement (probably very happy that it was me and not them).

Malachi finally had a chance to kick the ball twice and had big grins on his face and we went and sat down again. Oh the things a mother must do (and where in the world was the daddy?) (at Justus’ game…so he had a good excuse).

I’m so sorry to report that I don’t have a picture of this part of our evening…I guess you’ll just have to picture that little event in your head.