We have been getting such a kick out of Malachi for the past few months. Ever since he started learning to say his “r” sound, he has been putting it into words whether it has an “r” sound in it or not. For instance, the word look comes out like lerk. So, when he wants me to see something, he’ll say, “Oh, lerk, Mama!” He also asks me to read him a berk (and it’s really funny when he wants to “lerk at a berk”!).

When I ask him where his blanket is, he’ll tell me that he “purt it over there”. Sometimes he helps his brothers and Daddy bring in some “word” to burn in the fire.

It’s so cute and fun, and when he starts saying it correctly, I’ll be a little sad. However, it won’t be so cute when he’s 12, so eventually I guess I’ll be okay with him saying it right. In the meantime, whenever I get the chance, I’ll ask him questions about how he’s doing and how he’s liking something so that I can hear him tell me how gurd it is.

Take a gurd lerk at this sweet three year old reading his berk! 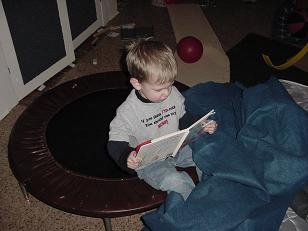 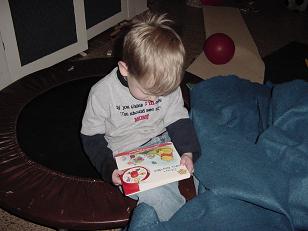