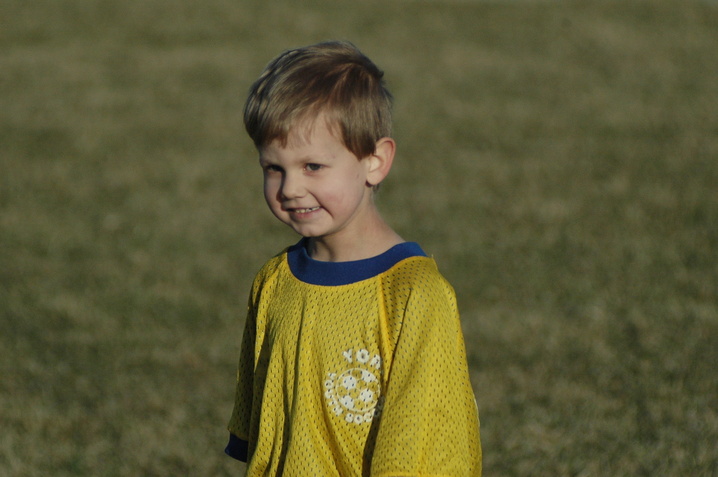 We are full swing into our spring soccer season around here. I love it…but wow does it keep us hopping. Well, that would be kicking actually.  You know what I mean.

I’ve been pushed out of my comfort zone just a little bit this season. Matt and I agreed to coach Elias’ team as the league is a little short on coaches. Of course this wouldn’t seem to be a big deal since my husband knows a thing or two about coaching soccer. However, Matt has had to work during several of the games. And you know what that means right? Yours Truly gets to coach. Somehow I’ve survived, and don’t tell anyone…but I’ve sort of even enjoyed it. You don’t really have to know what you’re doing. You just have to substitute the kids in and out and make sure everyone gets fair playing time. And you have to yell really loudly so that the players can hear you when you’re trying to tell them something like, “Buddy! You need to kick that out of there! No!  The other way!!!”  This works not at all, because while I’m yelling as loudly as I can, they still can’t hear me. It’s fun.

Also, much like his first season of playing soccer, our youngest son Malachi still has a lot of hesitation to get out onto the field. He LOVES prepping for the game, putting on his uniform and shin guards and cleats and long socks. He talks about soccer all the way to the game, about scoring goals and about kicking the ball so hard. And then, every time his coach wants to put him into the game, the kid holds onto the bench like his bootie is glued to it and no-way-no-how are you going to make him go onto the field and play his favorite game.

And so, just like last year…during his games I’m out on the soccer field with my nervous five year old. Together, we follow the ball around as I try to get him used to being on the field with other four and five year olds.

I am utterly relieved and excited to say that we finally had a break-through Thursday night. Slowly but surely, Malachi got into the swing of things and started moving on his own. And slowly but surely…I backed away until I was off the field letting him play all by himself. Hallelujah!

I’ve gotta say though that the more I’ve been on the field with him, the more I’ve realized how fun it would be to play the game of soccer. It was all I could do to keep from kicking the ball when it came to me (instead of hurrying to get out of the way before I tripped an eager four year old). Seriously. At one point the other day I almost forgot myself, and the fact that I was really just out there to encourage Malachi. All I could think of was, “Dude. I could totally take these punks.” Ooh, but I remembered who I was and where I was just in time to step out of the way and let the little guys get the ball. But not before I actually tripped a small boy on the other team and made him roll over in the grass. Good one, Laura.

Which leads me to my question today.  How athletic are you? Are you the kind of person who is natural with any kind of ball (or at least with some kinds of them)? Can you run without tripping (yourself or someone else)? When you hit a ball or throw a ball or shoot a ball…does it actually go where you want it to go?

Or are you maybe a little bit like me? Try as I might, athletic activities just don’t come very easy for me. It’s not natural for me. Balls don’t go where I want them to go. Ever.

But it did feel good, if only for a moment, to know that I could have been able to run faster and kick the ball harder than the little kids on the field with my five year old son.